Cheswardine based Venables Oak, the trading name of Venables Brothers Limited, has installed a biomass boiler designed and manufactured by Wood Waste Technology Ltd of Stafford, at the Venables Oak sawmill and company headquarters.

Venables Oak specialise in buying, sawmilling, processing and working oak and other European hardwoods. The process produces a large amount of disposable wood waste as a by-product at their rural sawmill and the company found that they were paying around £10,000 per year to have the waste removed from site.

Brothers Chuck and Paul Venables started to look at biomass heating options for their business several years ago, as a cost effective way of saving money on waste disposal and heating bills. They purchased a WT15 boiler from Wood Waste Technology in September 2010, which is still in use. 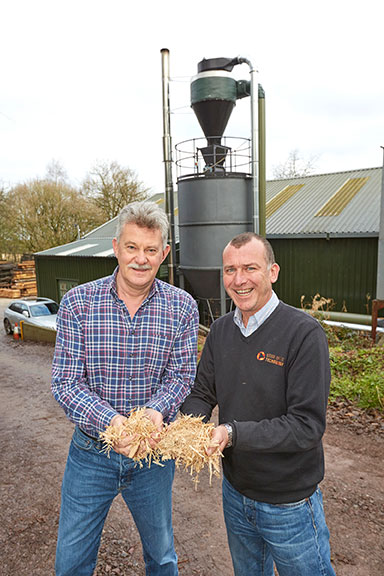 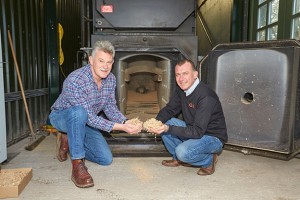 In 2014 the brothers heard about the Government’s Renewable Heat Incentive (RHI) scheme and discovered that they could qualify for non-domestic RHI payments by purchasing a biomass boiler. The RHI scheme is delivered by Ofgem and provides financial support for renewable heat technologies for the lifetime of the installation. As well as providing heating for the factory and heating and hot water for the rest of the buildings, the new boiler will also enable the company to create a “climate room” where Venables can kiln-dry certain woods.

The RHI scheme offers substantial financial benefits to companies that invest in new biomass technology. Wood Waste Technology’s boilers are designed and tested to BSEN303-5-2012, the highest standard for efficiency and emissions, allowing customers to maximise their return from the RHI scheme by getting more money from every kilogram of fuel burned.

The boiler was installed into Venables Oak’s sawmill in summer 2014 into a purpose built boiler house next to the factory, and uses strategically placed air handling units to distribute warm air from the boiler to the factory for heating and hot water. As the sawmill is situated in a quiet rural location, the team at Wood Waste Technology had to ensure that the background noise from the boiler was less than 40 decibels – around the same volume as a library, and quieter than 44 decibel birdsong. They achieved this by implementing their own exclusively designed biomass fans. The noise levels were reduced even further by soundproofing the boiler house, making it a semi-anechoic – that is, sound absorbing – chamber, so the boiler cannot be heard outside of the premises.

Other benefits from the biomass boiler includes a reduction in the manual handling of wood waste, as the offcuts are shredded on site, as they are produced, then air transported via a duct to a large silo that automatically feeds the boiler when required. This also ensures that the workshops are safer, as the accumulating sawdust from production is fed into the boiler to produce heat.

Director Chuck Venables says, “Following a site survey, Kurt and the team worked with us to build exactly what we wanted and will maintain it for its lifespan. The boiler cost £120,000 and already saves us around £20,000 a year, and we ascertain that it will pay for itself in four to five years. The biomass boiler is making a positive difference to the way we work, as it removes the wood waste we produce by turning into a free heating source, as well as allowing us to generate extra income from the RHI scheme. It also reduces our carbon footprint and removes our contribution to landfill – we’re very proud of that.”