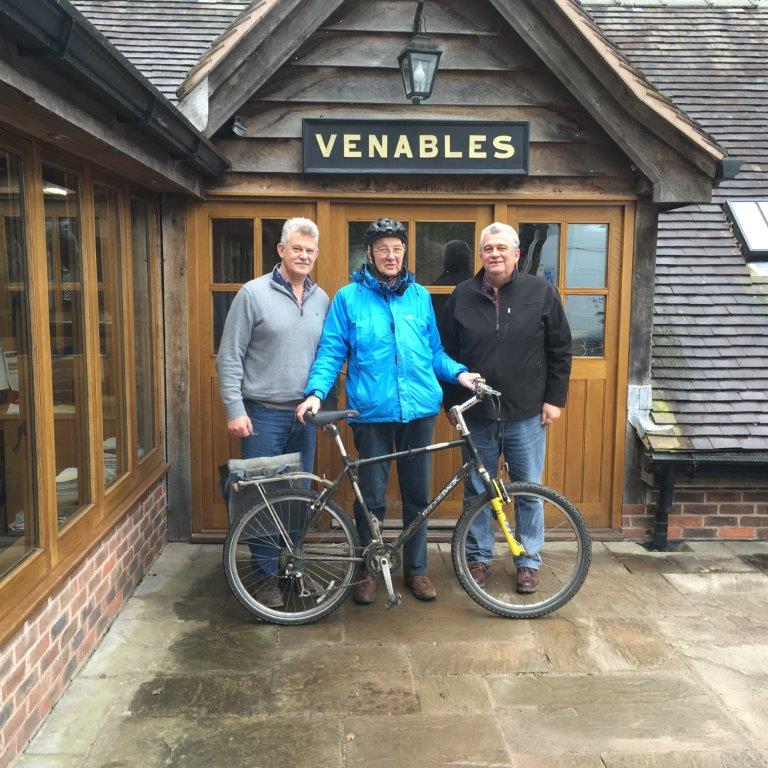 Dick Venables and his sons Chuck (L) and Paul Venables

Dick Venables, 84, of Stafford will cycle 200 miles from Stafford to St Davids, Pembrokeshire in memory of his wife Caty and to raise funds for a children’s shelter in India. Dick has been in training for “Grandad’s Tour de Wales” for the last few months, and begins his challenge on Thursday 16 June, aiming to reach St Davids on Saturday 25th June.

Dick is raising money for Dalit Freedom Network UK, a trafficking prevention organisation working with women and children from poor and marginalised communities, including Dalits (Untouchables), in India. The money will go to the Pratigya Children’s Shelter which provides a safe place for young girls who are at risk of being forced into sex slavery in the southern Indian state of Telangana. Currently 40 girls are able to grow up in a loving, caring environment, with access to counselling, healthcare, nutritious meals and a quality education. It provides them with hope and opportunities that would otherwise be denied to them.

Great grandad Dick is the father of Chuck and Paul Venables of Venables Oak, a specialist timber and joinery company based in Cheswardine, Market Drayton, Shropshire. The original company carrying the Venables name was started over 160 years ago by Dick’s great grandfather Henry Venables and had its own train station halt at the company HQ in Stafford.

Dick will set off from Rising Brook Baptist Church Stafford at around 9.30am on Thursday 16 June and hopes to cycle around 30 miles a day. He will be accompanied by Marcus Janes. Marcus is the son of Dick late wife’s Caty’s sister, Madeleine. The trip takes in Newport, Wellington, Shrewsbury, Montgomery, Newtown, Llangurig, Newbridge, Carmarthen, Puncheston and Caerau Bach, and Dick and Marcus will be accompanied on the final push into Britain’s smallest city by family and friends, including sons Chuck and Paul, arriving at the War Memorial cross in the centre of St Davids around lunchtime on Saturday 25th June.

Jeevaline Kumar, Director of Pratigya India, says, “We are so grateful to Dick – he is an amazing man. The money that he is raising will help us to expand our shelter so that we can care for 100 girls who otherwise would be severely exploited and abused. The shelter is making a huge difference in the lives of these children. Here they can live with dignity. All of the girls in our shelter have dreams and ambitions, aspiring to become doctors, lawyers and engineers. We are working hard to make all their dreams become a reality. Thanks to Dick we can do this for even more girls.”

Find out more about the work of Dalit Freedom Network on their website www.dfn.org.uk.

Anyone wanting to support Dick’s ‘Tour De Wales’ can do so online at http://uk.virginmoneygiving.com/DickVenables To date, Dick has raised almost £5,000 by online donations.